Home Budgeting Gold Should You Save or Sell Your Valuable Heirlooms?

Should You Save or Sell Your Valuable Heirlooms?

This question tends to pop up at difficult times in life. It’s not uncommon to find yourself in possession of some odd goods when a friend or relative dies. And it’s at times like these that you might be ill-equipped to manage these goods, especially if you are feeling a lot of grief at the time. There are many considerations to make, and not all of them have to do with the precious metals exchange rate that applies to your situation.

This is because many of these items will have sentimental value in addition to monetary value. People might feel guilt for trading an item that reminds them of a lost loved one for cash. But this isn’t always the way to think about it. Death happens, and memories of loved ones should be afforded a certain place in your life. But it should also be compatible with how you live. If an item, such as a piece of furniture or a painting, can be loved and displayed in your home on its own merits, not just because it belonged to a loved one, it might be a good addition to your life, as well as an appropriate reminder of your loved one. But if the item doesn’t have any value to you other than its sentimental value, it isn’t appropriate to sell it after a certain amount of time. In most cases, the individual who passed it on to you would rather you have security and happiness than perpetual possession of the item in question.

That aside, let’s talk money. Oftentimes, people inherit items made of precious metals, like gold, jewelry, and coins. Because these items have no function in themselves, other than to serve as placeholders for wealth/value/buying power, it makes sense to sell them when they’ll command the highest price. But when is that? Do metals like gold always increase in value?

Well, not really. Gold, for instance, has something of an inverse relationship to the standard economy. If you look at charts of gold value, you’ll notice that gold tends to be in high demand when the US economy isn’t doing so well, and vice versa. This is because gold represents inherent value, while the economy is based largely on perceived value and goodwill. The economy works well when people spend money without much worry. When people are worried, they don’t spend money. Keeping gold is the epitome of “not spending money”, and it’s an example of people putting their trust in something they feel might have more staying power or foundation than a particular market.

So in general, I say buy gold when the market is good, sell it when it’s down. As you can see, this would’ve worked out to great effect if you bought a bunch of gold in the hot-economy days of the ’90s and kept it till the financial crunch of 2008. But because these things are impossible to predict, and because gold doesn’t have inherent factors which determine its value, I generally sell gold a lot more than I buy it. And that’s how I generally treat stuff if I’m ever in a position to inherit money or goods. A lot of top finance blogs agree. 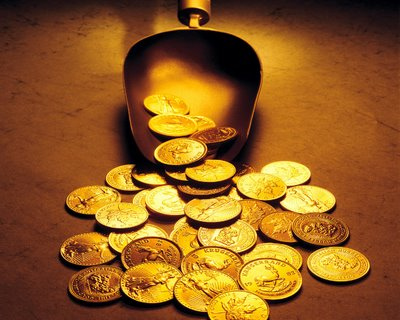 Ways in Which You Can Handle Startup Money Effectively