Preparing New Year Budget: Are you doing it Right?

For many of us, the concepts we learned about saving money are at best out-dated. Investment isn’t even something the average person learns about or considers until they’re in university. Even then, it is looked at in terms of making money without any work, rather than as a vehicle to build wealth. That’s not to say that getting rich overnight doesn’t happen, but it’s rare, and not the reason one saves. It’s also not something we teach our children.

This is largely due to our educational systems, but they aren’t the only reason we grow up not understanding finances well enough to teach our own children. Rather, the world of finance changes quickly. Much like technology, what worked 20 years ago doesn’t work today, except perhaps for that old telly your parents are still using. Because of this, we aren’t usually well equipped to teach our children about finance in any meaningful sense. However, just as the foundations of mechanics and electronics haven’t changed drastically over the years, the foundations of what makes good financial management haven’t changed either. 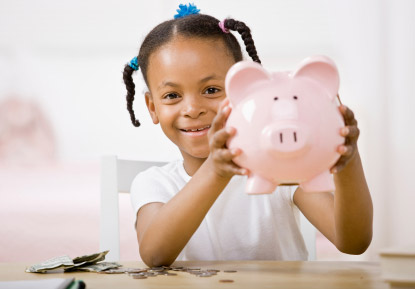 That means you can and should get your children started off early with those financial foundation skills, by teaching them these five important steps. If you do that, they’ll be well on their way to being millionaires, which should be a goal of every parent in the UK.

1) Don’t Save Too Much Money: This is perhaps the single most important piece of financial advice you can give a child. They should learn to save enough money to meet three months of their expenses, and invest everything else. This is because, if you only teach them to save money, then what they save in most cases will barely keep pace with inflation. As reported by the Daily Mail, 8 out of 10 savings accounts reviewed aren’t keeping pace with inflation. That means the money they would save is worth less every year. Instead, teach your children to invest, as discussed in step two.

2) Make Sure Your Children Know About Investing: Historically speaking, the stock market has had an average return of 10pc. While some years have been better than others, and some have been worse, this is an historical 100-year average that is far better than any savings accounts. By teaching your children to invest money they don’t need to meet emergency expenses, they’ll be able to significantly grow their wealth, and one day become millionaires. That will then let them build wealth for their own children, and escape the financial cycles too many families in the UK find themselves trapped in these days.

3) Show Them How to Cut Costs: Children learn by example more than any other way. They see what you do, and their comfort levels are built around that structure. If you work every day, and go out every weekend with them, then they learn this as not only an acceptable behavior, but also a life goal they will likely seek to emulate. If you also constantly splurge, then they will also establish this unhealthy practice. However, by teaching them to save money on items, and to structure their purchases with a focus on that savings, you’re setting an example that will help them in everything they do. One great way to do this is in energy saving steps you can take around the home, which teaches them about savings over the lifetime of a device or purchase, accounting for the initial purchase cost, and lifetime investment value.

4) Teach Your Children to Put Their Money to Work: Too many of us are wage slaves, meaning that we work for a salary, and not a job we love. Realistically speaking, this is a simple fact of life. It’s not something you can teach your children to do differently, as even the most loved professions eventually become work to those who perform them. However, you can teach your children to look at it differently. For example, show them that they are not working for a wage, but rather working to increase the amount of money they have. By shifting their perspective to look at money as a tool that works for them, they will view their work and salary as a tool that enables them to grow wealth. By teaching them that every pence has a job, and showing them how to put each one of them to work, you’re helping them to build wealth, building a foundation for them to later also understand management principles and making sure they hold a job, even if it might not be their favourite job in the world.

5) Explain Credit: There are both good and bad aspects of credit. By explaining these to your children, you’ll be showing them what they can do to better their lives with credit. At the same time, you’ll be protecting them from the worst elements of credit, and teaching them to save for purchases, rather than deplete their wealth by making large buys with credit that they shouldn’t. Perhaps more importantly, you will also be teaching them the exceptions to this rule. The most notable being a home or a car purchase – especially if the interest rate they might pay is less than an investment portfolio return. For example, a child without a firm understanding of credit might spend invested cash on a £20,000 car. They would think that they were saving money by not paying interest, when in fact a 7pc interest loan over five years would translate to a 3pc loss on their average 10pc investment return. Over five years, that’s a loss of more than £3,000.

Providing a sound financial education to your children is not easy, in part because you need to educate yourself first. Only then can you teach them to behave in a fiscally responsible manner, and put their money to work, rather than working for their money. However, it’s a positive life change for you, and a lesson that will cross generations, enabling your grandchildren to retire with huge investment portfolios.